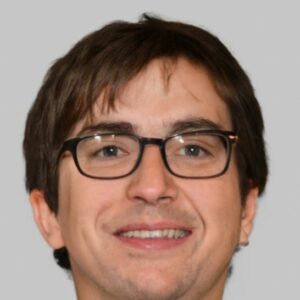 Latest posts by TheGamerGuy (see all)

It doesn’t matter if you are a recreational gamer or aspire to be a hard-core professional gamer: you need a fast WiFi adapter. I think most gamers are smarter than the average bear and don’t have any problems keeping up with the latest technologies. But being to identify the latest and greatest wireless technology (like an IEEE standard) isn’t the same thing as knowing which WiFi cards are the best. 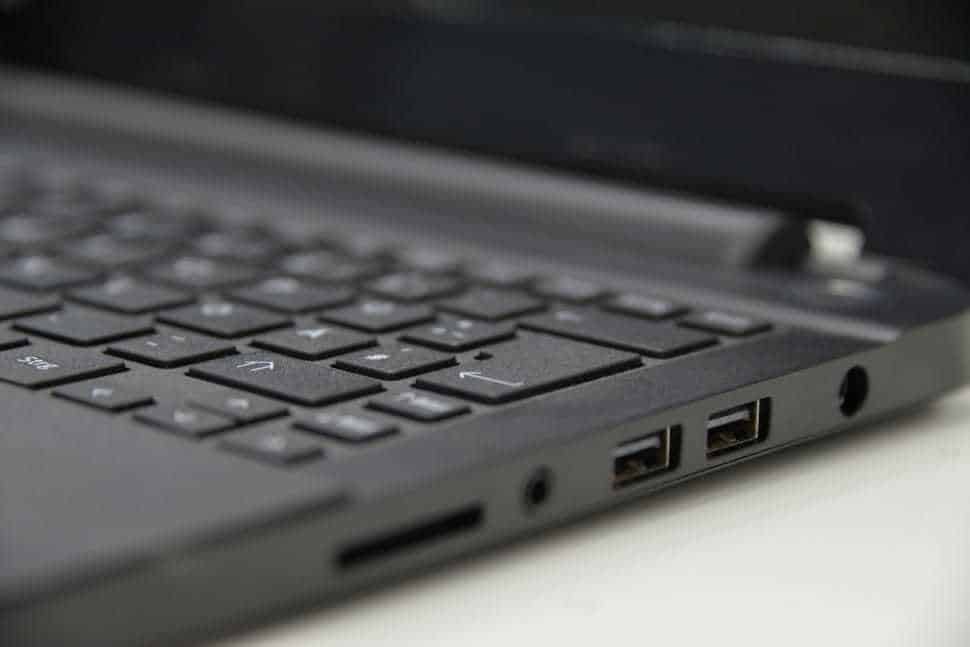 I’ve heard and read some people claiming that wireless USB adapters are inferior to an internal network card, such as one you might actually plug directly into the motherboard on your custom-built desktop or the one already seated on your laptop.

But allow me to take a moment to dispel any of these myths and misinformation. Some even say that if you use an older USB technology, then you’re bottlenecking your network bandwidth through the USB port.

But that’s not necessarily true, even if you’re using the older USB 2.0 technology. However, most of you likely have hardware that was made in the last few years, making the chances of having a USB 3.0 port very high. At any rate, the theoretical maximum data transmission speed of both USB 2.0 and USB 3.0 technologies are many times faster than that of typical network interfaces. For reference, note the following USB theoretical maximum speeds:

Now, for reference, let’s look at the bandwidth of common network interfaces:

However, if you wanted to use one of the latest and greatest high-speed interfaces, such as Wireless AC, then it would be advisable to use a USB 3.0 card. I haven’t yet run across a wireless AC USB adapter that uses USB 2.0, but it’s worth checking the specs of the hardware before you make a purchase. After all, it’s better to be safe than sorry.

What Makes One WiFi Adapter Better Than Another?

There are many factors at play that determine which adapter is better than another – and some of these factors are completely subjective. First and foremost, many of you are probably thinking raw throughput and bandwidth are the most important factors for gaming.

While it’s true that bandwidth is an important factor, the vast majority of real-time multiplayer games don’t eat up more than a few Megabytes per second of bandwidth, and some eat up even less. Latency is typically a much more important factor, which is more often determined by your router, ISP, and whether or not you use additional security products like a VPN tunnel.

Bandwidth does matter though, because it can drastically improve gaming-related downloads, such as downloading a new game from steam or transferring media files and account data between gaming consoles. Still, bandwidth isn’t at the top of my list since all of the latest and greatest WiFi adapters are so darn fast, to begin with.

I do, however, think that portability is an extremely important factor. Do you play games on a laptop? If so, portability likely matters to you too. If, on the other hand, your gaming rig is set up in your home and you don’t want to move it for fear of damage, you probably don’t care what the device actually looks like.

In summary, the following are some of the most important factors to consider when selecting a WiFi USB adapter:

Now that we know what to look for in a WiFi adapter, let’s go ahead and take a look at the best WiFi adapters for gaming, starting with the Trendnet TEW-809UB. 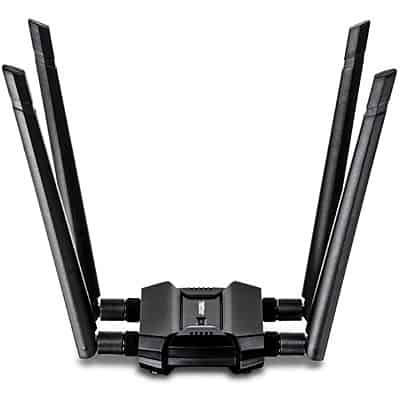 This behemoth of a WiFi adapter is perhaps one of the ugliest looking electronic creatures I’ve ever laid eyes on…but as far as performance is concerned, it’s at the top of the list.

Naturally, the better performing USB WiFi adapters cost more money, and this model is certainly priced at the higher end of the market. This “Network Interface Card” (it really looks like a wireless router) costs $89.99, and it comes with a one year warranty.

And it does, of course, utilize USB 3.0, as well as all of the latest and greatest wireless features. Naturally, this monstrosity is intended for desktop use, but the four external antennas are detachable and operate a dual-band frequency in the 2.4 and 5Ghz ranges using wireless N and wireless AC specifications.

It also has beamforming technology for improved signal strength and supports both Windows and Mac (sorry Linux users). Lastly, note that it’s not only good for gaming but also high definition video streaming. 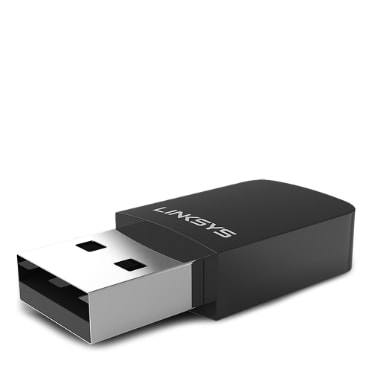 Next up is the Linksys WUSB-6100M, which is more of a typical USB WiFi dongle – at least when compared to the last model. Unlike the Trendnet model, this Linksys WiFi adaptor is only about the size of a flash drive and doesn’t include any bulky or unsightly external antennas. Plus, it’s significantly cheaper, too.

Right now it only costs $59.99, and comes loaded with wireless features. It does, of course, support the latest IEEE 802.11AC standard, and even supports MU-MIMO for multiple concurrent bands. It also supports dual-band functionality in the 2.4 and 5Ghz ranges, as you would expect. If you’re looking for something fast, unobtrusive, and affordable, I’d highly recommend the Linksys WUSB-6100M. 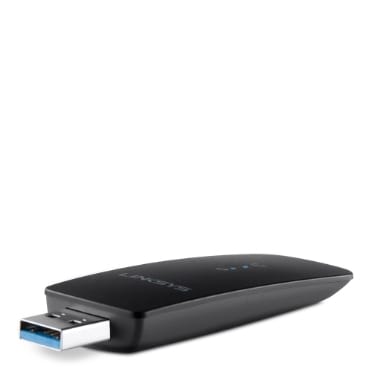 I did also want to include the Linksys WUSB-6300 as well. It’s actually very similar to the previous model, save for a few key differences. First of all, the size of the adapter is only slightly larger than the previous Linksys model, so it’s still highly portable and unobtrusive. It does utilize USB 3.0 too, but its real strength is higher wireless speeds.

This model can achieve maximum speeds of up to 867 Mbps in the 5Ghz band, though that data rate online is highly unlikely. Not only would you need to be extremely close to the wireless router, but you would also have to at least a Gigabit connection with your ISP. And even then, you’d need to initiate so many downloading and streaming connections at the same time that it’s unlikely you’d ever use the full throughput capacity.

Still, I did want to include this model because it’s a slightly newer and improved version of the last model, and some people who are serious gamers and power users may want the extra throughput. 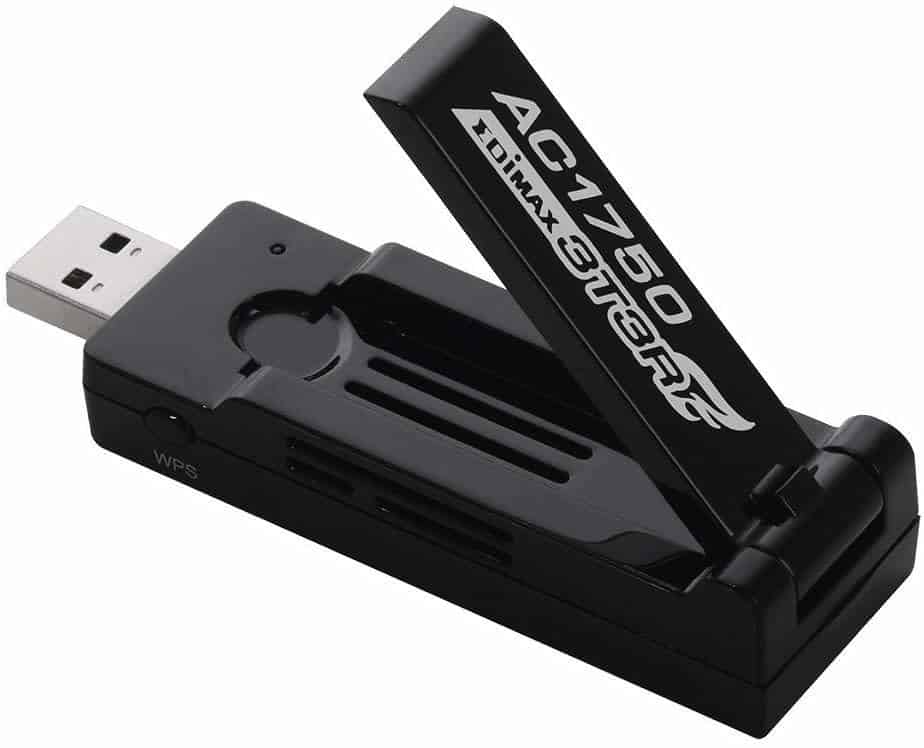 The next WiFi adapter, the Edimax EW-7833UAC, can be purchased for about $34.00, making it pretty cheap and affordable compared to the previous models. It is relatively small too and is only about the size of a thumb drive.

It is a little bulky, as far as flash drive sized WiFi adapters go, anyway, due to one of my favorite features of this model: an external antenna. That way you can maximize the strength of your wireless signal by pointing the antenna in the direction of the wireless router.

Naturally, it does support IEEE802.11AC and supports AC1750 speeds and throughput, thanks to its dual-band capability in the 2.4 and 5.0 GHz ranges. Last but not least, note that this model does support MIMO and Beamforming technology, so it can take advantage of the fastest speeds from the latest wireless routers. 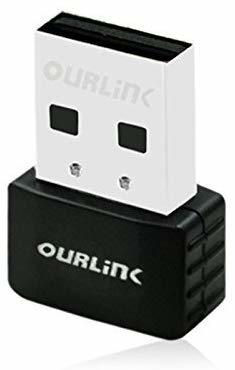 The OurLink AC600 is last, but not least. Well, in some ways, it is the least I suppose. For instance, it’s one of the smallest WiFi adapters on the market and is so small that it’s hardly noticeable when plugged into your USB port. For that reason, I think this is the best option for users who want something extremely portable. Furthermore, it’s dirt cheap, too.

But its small size and cheap price do have their drawbacks. This certainly isn’t the fastest USB WiFi adapter on the market, so it’s a bit of a trade-off. But if you need a modern wireless AC compliant WiFi adapter that’s small and cheap, the OurLink AC600 is what you’re after.

If you’ve already got a wireless router that supports 802.11AC, then I’d highly recommend buying a wireless USB adapter to amp up your bandwidth and throughput to improve your gaming experience. I’d also highly recommend investing a significant amount of money in a high-quality Internet connection. I think too many gamers forget that the three biggest factors that determine their online gaming experience is their ISP, their wireless router, and their wireless adapter. If you’re in the market for a wireless adapter, you can’t go wrong with one of these models.

Is anyone here in a position to recommend Skirts? Cheers x

I look after a vape store submission site and we have had a listing from a vape shop in the USA that also offers CBD items. A Calendar month later on, PayPal has written to use to say that our account has been restricted and have requested us to take out PayPal as a payment method from our vape shop submission site. We do not sell CBD goods such as CBD oil. We merely provide marketing solutions to CBD firms. I have taken a look at Holland & Barrett-- the UK's Leading Health and wellness Retailer and if you take a close peek, you will witness that they sell a somewhat wide-ranging range of CBD products, specifically CBD oil and they also happen to accept PayPal as a settlement method. It appears that PayPal is applying double standards to many different firms. As a result of this restriction, I can no longer accept PayPal on my CBD-related internet site. This has restrained my payment options and currently, I am seriously dependent on Cryptocurrency payments and straightforward bank transfers. I have consulted with a lawyer from a Magic Circle law practice in London and they explained that what PayPal is undertaking is absolutely against the law and discriminatory as it should be applying an uniform criterion to all firms. I am still to talk with another lawyer from a US law office in The city of london to see what PayPal's legal position is in the United States. For the time being, I would be extremely appreciative if anyone here at targetdomain could offer me with substitute payment processors/merchants that deal with CBD companies.

Has anybody ever shopped at Rockavape Ecigarette Shop located in 2680 Trenton Rd. Suite 100?

how to get sex toys as a minor

Can someone recommend C-string? Thanks xox

Emojis in Email: Make Sure You Do It Right

Can anyone in a position to recommend quality Inflatable Boats B2B Business Data List? Thanks very much :)