Latest posts by GameGuy (see all)

Picking a gaming mouse these days can come as quite the picky affair. With such a vast range of choice out there, it’s far too easy to end up lost, confused, scared. Panicking perhaps in a corner, whilst all these technical terms are being thrown in your face with little to no explanation. Well, that’s where I come in.

Here we’ll break down the meanings of things such as DPI, Sensors, all that jazz, and bring up some recommendations that are best suited to specific situations/games/hand sizes, etc.

You’ll be a pro on this stuff in no time.

Hand sizes and how they’re important

An odd, but important factor not to overlook is actually the size of your hand. Gaming mice come in a variety of sizes, usually built with a specific hand size in mind, so one thing that might sound a bit strange, but trust me when I say it’s useful, is to measure your own hand and get an idea of what you’re working with.

Note that anyone can really use any mouse, and personal preference will always be a factor, but I’m speaking generally here.

From here it’s important to take note of how it is you actually grip your mouse. It’s simple enough to find out though, and will help define the size and shape of the mice you should be looking at.
Simply take your mouse in hand as you normally would (if you don’t have one on-hand then perhaps test one out in a nearby electronics store) and do a bit of fiddling about on web-pages, or better yet, play a game you frequent.
From here you’ll most likely fall into one of three categories:

With that out of the way, we’re almost ready to start shopping. But wait, what is DPI? What’s the difference between optical and laser? These are important things to note too.

DPI, or Dots per inch, is how the sensitivity of a mouse is measured. Higher DPI will result in your cursor moving further with smaller gestures. A lot of gamers swear by having high DPI, as it gives them more accuracy when aiming in a shooter, for example.

High DPI won’t always feel better for everyone however, so if you prefer the feel of a mouse with a lower number, don’t feel like you’re in the wrong, just because the marketing pushes high numbers as being largely more important than they might actually be.

What does Macro mean?

In short, macros are a simple way of performing otherwise complicated tasks. For example, in a game like World of Warcraft, you can locate the macro settings usually found in software tied to your mouse, start recording, perform various spells and buffs in an order you often do and want to repeat, then stop recording and hey presto! You can now perform all those actions with a single button click.

It will even record the delay between clicks, movement, etc. so you can really fine-tune this to do exactly what it is you want.
As you might imagine, macros have various useful functions outside of gaming too, so these are a very nice feature to have.

This is an interesting one, because if you do a quick Google search on this topic, you’re going to find a lot of outdated information hanging about.

While there is often an argument over which type of sensor is better,  these days you really can’t go wrong with either, especially if you’re buying from a top manufacturer.
For a long time, laser mice were considered the go-to for gamers, but in recent years the gap between the two is closing more and more.

Picking the right mouse for your lifestyle

So how do I find one that’s right for me, you may ask. With so many brands competing, the market is flooded with fantastic, high quality mice made specifically for gaming, and honestly, sticking to the market leaders, you can never go too wrong.

Brands such as Razer, Steelseries, Logitech, Roccat. All of these companies produce amazing mice, and there is no clear winner among them. Saying that though, there are still a lot of things to consider when making a decision.

The games you play can have an impact on your choice. For instance, if you’re someone who likes to sit back with an MMO, you don’t necessarily need your mouse to be super lightweight and pixel-perfect responsivity-wise.

For games like World of Warcraft, Final Fantasy XIV, Guild Wars 2, etc. it’s a common choice to go for something a bit larger and more comfortable, with a large amount of buttons to assign your many skills to.

For MMO players I would suggest…

Perhaps you’re more of a MOBA player though, and for that, there’s certainly a market.

So if League of Legends, Dota, Heroes of the Storm, etc. are more your cup of tea, you’re going to want something that’s accurate and comfortable, but can also withstand a serious amount of clicking, without too much need for a load of buttons.

For MOBA players I recommend…

We’ve almost covered all the main bases now, but we can’t forget those shooters.

So if you’re someone who enjoys firing down a sight in the likes of Overwatch, Call of Duty, Fortnite, etc. you’re going to want something light and super responsive, with pixel-perfect tracking for those scope shots.

For FPS players, try these…

Related: How to Find the Best FPS Gaming Mouse

All of the listed mice are brilliant in their own right, so don’t feel too confined to the categories I’ve put them in. This is a subjective matter, and to each their own, really.

In general though, for specific needs, this list should be of use to you:

Another somewhat outdated result you may find in a quick search of the internet is that wired mouse are the way to go, without a doubt. While this was most certainly true in the past, these days the difference is negligible.

If you have the cash and are investing in a high-quality, branded wireless mouse, then off you go, I can’t blame you.

For a lot of us more casual customers though, the price difference can be hard to stomach. While I believe in years to come the gap will shrink exponentially, for right now, it’s hard to recommend paying so much more when you can get the same and technically more reliable mouse, for a lot less.

Wireless mice are in general on the heavier side as well, as you might imagine, given that they have to carry a battery inside of them. Now, I expect this not to be the case forever, but as we stand today, just note that they’re usually heavier than something that’s wired.

Pro players in esports swear by their wired mice, as it’s simply too much of a risk with the current technology to go wireless. Should their mouse run out of charge or simply drop connection for a nanosecond, these people could be out thousands.

Companies are working on various workarounds for this though. For example, Razer now sells wireless mice that never lose charge as long as they’re placed on their proprietary mats.

So, should you go wired or wireless you shouldn’t have any problems. If you’re leaning toward wireless, I recommend Logitech for now, as they’re managing to keep their prices lower and technology first-class.

There’s no such thing as a perfect mouse, and everyone is going to have a different opinion, but for all-round, daily use in every type of game, the mouse that comes out on top is…

With it’s array of nicely placed, not too in-your-face buttons, the Rival 500 hits a perfect balance between comfort and functionality.

With 15 buttons to mess about with, you can’t really fault it, and it’s tactile alerts feature is sure to be a useful addition to any game.

It’s a heavy mouse, but it does it’s job, and it does it extremely well. 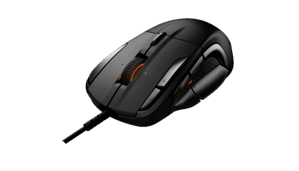 And of coursel, I’d like to note that this is all subjective, and that you should never discount a mouse because someone else didn’t like it so much. When talking high-grade, expensive gaming mice, you’re getting a good experience 99% of the time.

Do you agree with the outcome and suggestions here? Or do you now hate my guts. Let us know in the comments, and maybe suggest some mice you think you are good.