And mouse technology (doesn’t that sound funny?) has really grown into two main features that make all the difference: the design/weight of the mouse and its optical sensor. Not only do you want a model with high DPI resolution to provide an extremely accurate sensor, but you also want it to feel so natural in your hand that you forget you’re holding it. The problem, however, is that all of this great technology comes at a price.

Naturally, computer mice won’t cost as much as the latest motherboard or the most cutting edge graphics card, but some of them are pretty darn expensive. For that reason, we’re going to look at the low to mid-market models for those of us on a budget.

What Constitutes a “Low Budget” Mouse

I did want to take a moment to talk about the price. Everyone’s budget is different, so what seems cheap to one person may not seem cheap to another.

However, the aggregated mice in this list need to be good enough to use for gaming without falling apart while not breaking the bank at the same time. For that reason, we’re going to be looking a low to mid-market gaming mice that are relatively cheap when compared to the high end of the market.

It may sound crazy to people who aren’t gamers, but some people spend upwards of $150 or $200 for a high-quality mouse. At the very low end of the peripherals market, I’ve seen mice for as little as $5 or $10…but they were utter garbage. So, to help you find a low priced yet relatively high-quality mouse for gaming, we’re going to be looking at models in the $30-$60 range, with one outrageously cheap exception. 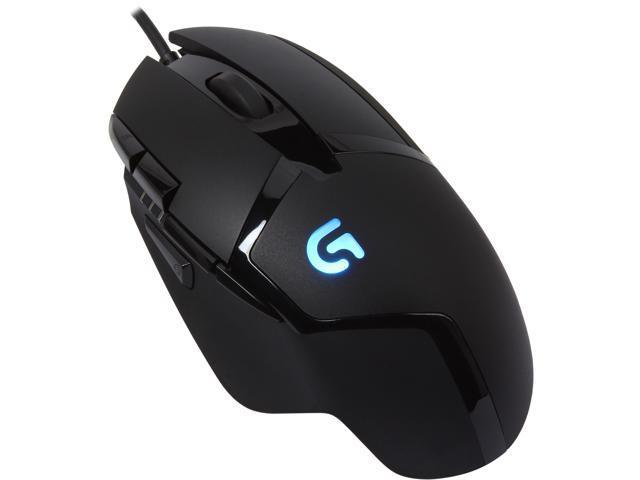 Logitech has been making quality computer peripherals for years. Just about every gamer has used one of their products at one time or another, and I do trust their brand (as long as you stay away from the really low-end products). This mouse, however, lies somewhere in the middle of the market.

If you buy this mouse brand new, it will cost about $60, which is near the high end of our budget. However, if you buy it off Amazon and decide to get a used model, you can knock off a third of the price and get it for $40.

This model is, of course, a wired USB design, with a USB report rate of 1GHz and a 32-bit microprocessor. It also has the Fusion Engine hybrid sensor and 8 programmable buttons.

The Logitech G402 was designed to have extremely low latency for the most unadulterated input so that the only thing that matters is your reflexes. As you can tell by the name, Logitech is clearly trying to target players of FPS games. However, I do like the fact that it has eight programmable buttons, which gives it some moderate functionality in RTS and MMORPG games. 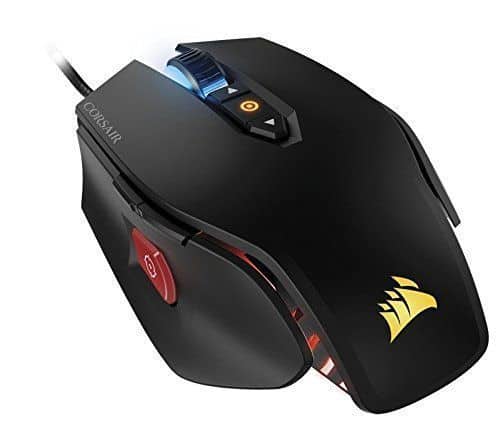 Next up is the Corsair Gaming M65 Pro RGB FPS Gaming Mouse, which has all the features you’d expect in a high-performance gaming mouse. And it comes with a ton of customization features.

The going rate for this product on Amazon is about $47, which isn’t too bad given our budget. The list price is $59.99, but in reality, you can get it much cheaper, especially if you buy it used (used price approximately $39.99).

The movement sensor has 12,000 DPI, which is extremely high accuracy for measuring the most sensitive of movements. This feature means that the mouse can track motion more precisely than regular mice, but my favorite feature of this mouse is customization. It comes with a weight tuning system so you can confirm the weight distribution to your own personal preferences.

And naturally, you can custom program macros out the wazoo, since it comes with a double macro feature. Like the previous model, this gaming mouse also has eight different buttons too. It was really designed for FPS gameplay, but is still a great tool for RPG and RTS titles as well. 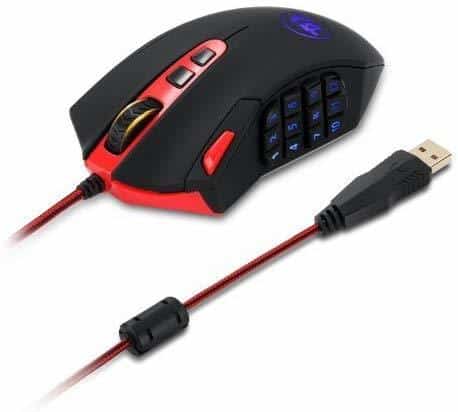 Who names these things? This Redragon model was designed as a high-performance gaming mouse. And as a laser mouse, it’s even more precise, accurate, and sensitive than the previous model that only had a 12,000 DPI sensor.

This model has a sensor with a 16,400 rating, and it won’t break the bank either. You can snag one of these high-performance tools for only $37.00, and that’s if you buy it brand new.

But unlike the previous two models, this mouse is an RPT or RTS player’s dream. Seriously, this mouse has more computational power than the first computers! It has 18 programmable buttons distributed over the design, 12 of which are conveniently placed over thumb position. The keys were designed with tilted planes so you can easily map out the buttons in your mind simply by touching them.

Plus, it comes with five different memory profiles that you can color code to map your macros to different games and different characters. Of course, it does come with a way to customize weight distribution with an eight-piece weight set too. Other notable operational metrics include a 1GHz polling rate, 30G acceleration, and 12,000 FPS. 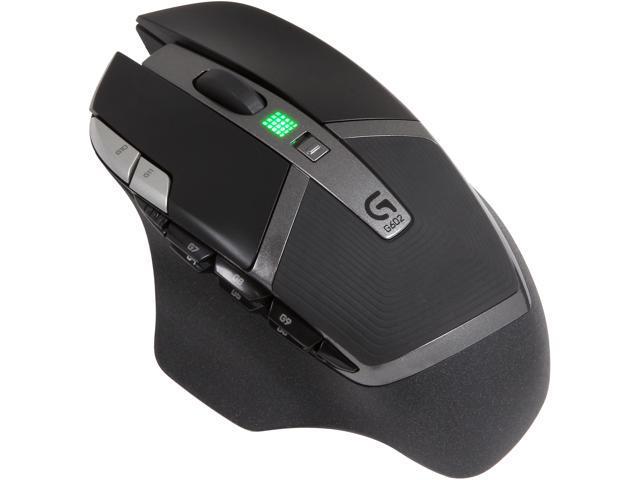 The Logitech G602 is pretty well-rounded, though the most hardcore FPS players may not want to use it since its wireless. Many professional gamers prefer wired mice, but this is a good “one size fits all” mouse for a couple of reasons. First and foremost, it’s cheap and will fit most people’s budget. You can pick it up on Amazon for only $34.99. The second reason it’s so well-rounded is because it has 11 programmable buttons

The previous model had 16, so the Logitech might not be your first choice for MMORPG and RTS play. Also, these models come with Logitech’s Delta Zero sensor technology, which helps drastically improve sensitivity and accuracy. Also, even though it’s a wireless mouse, don’t discredit it just yet. It has been rated to sustain up to 250 hours of battery life and up to 20 million clicks.

With up to 2500 DPI accuracy, it isn’t the greatest mouse on the market, but it isn’t the poorest either. I think this model offers a nice blend of functionality and affordable pricing. So naturally, I had to include as one of the best budget gaming mice. But it isn’t the cheapest alternative, as you’ll see with the next model. 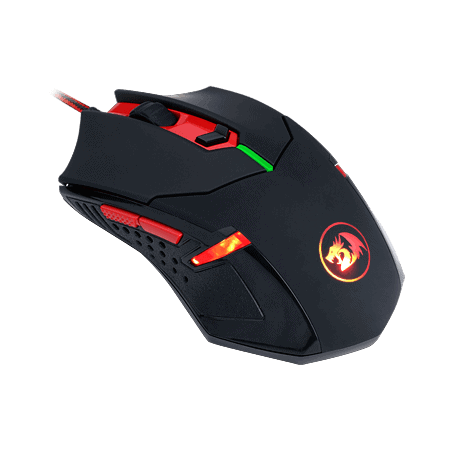 The last of the best budget mice for gaming has a price that won’t agitate even the most conservative budgets. If you’re looking for the cheapest mouse that’s still appropriate for gaming, then this is the model you’re looking for. You can purchase it new off Amazon for a mere $12.99, which is a pittance to pay for a mouse. To put things in perspective, this mouse only costs a fraction of a tank of gas for your car.

It does have an admittedly ergonomic design and up to 3200 DPI, 3600 FPS, and a 15G ACC game engine. Part of the reason this model is so modestly priced is that it lacks many of the bells and whistles of the previous models. It does, however, have five programmable buttons and up to five memory profiles. I was actually pretty surprised to see that it comes with an 8 piece set to tune the weight as well. Not too shabby if you’re looking for a dirt-cheap mouse to save money for other peripherals.

I’m not sure I would personally buy the Redragon M601. I only included it as one of the best mice at such a low price point, since there is certainly a segment of the market who wants nothing more. However, just think how many hours that mouse is going to be in your hand. You’re going to use it for everything from gaming to browsing the web, and you’d better make darn sure you like the stinkin’ thing.

While I don’t personally see too much value in buying a mouse that costs a whopping $200 or more (I’m not a professional gamer), I do want a mouse of above-average quality that I can customize and personalize to fit my preferences.

statistics on how many lingerie ads there are

I look after a vape store website directory and we have had a listing from a vape store in the United States that also offers CBD products. A Month afterwards, PayPal has contacted use to say that our account has been restricted and have asked us to take away PayPal as a payment method from our vape shop directory. We do not sell CBD items such as CBD oil. We solely provide online marketing services to CBD companies. I have had a look at Holland & Barrett-- the UK's Well known Health Retail store and if you take a good look, you will see that they supply a relatively wide-ranging stable of CBD items, specifically CBD oil and they also happen to accept PayPal as a settlement method. It appears that PayPal is applying twos sets of rules to many different companies. Because of this limitation, I can no longer take PayPal on my CBD-related site. This has limited my payment possibilities and right now, I am heavily reliant on Cryptocurrency payments and straightforward bank transfers. I have gotten in touch with a solicitor from a Magic Circle law office in The city of london and they stated that what PayPal is undertaking is entirely against the law and inequitable as it ought to be applying an uniform benchmark to all firms. I am still to consult with an additional lawyer from a US law office in London to see what PayPal's legal position is in the USA. In the meantime, I would be extremely appreciative if anybody here at targetdomain could offer me with different payment processors/merchants that work with CBD companies.

what department stores are having sales on lingerie?

Can someone recommend Berman Centre? Thanks xx

Is anyone able to recommend comprehensive Holiday Clubs B2B Marketing Lead List? Thanks very much :D