We and our partners use cookies to Store and/or access information on a device.We and our partners use data for Personalised ads and content, ad and content measurement, audience insights and product development.An example of data being processed may be a unique identifier stored in a cookie. Some of our partners may process your data as a part of their legitimate business interest without asking for consent. To view the purposes they believe they have legitimate interest for, or to object to this data processing use the vendor list link below. The consent submitted will only be used for data processing originating from this website. If you would like to change your settings or withdraw consent at any time, the link to do so is in our privacy policy accessible from our home page.

Kingdom Hearts 3 was a game that every fan of the series was looking forward to playing, and while the game wasn’t as great as everyone expected, it still was an amazing game. And just like every single other Kingdom Hearts game, this one also has a really confusing story, especially for those who are new to the series or have only played the main three games.

A lot of people have no idea that there are ten other games in the series, making it thirteen games overall, and while you don’t actually have to play all of them to know what’s going on in the main story, it can make things a little confusing sometimes.

So, if you just finished playing Kingdom Hearts 3, and you managed to get the ending, and the secret ending and you have no idea what’s going on, don’t worry, because hopefully, after reading this article you will actually understand what the ending means.

Also, in case you didn’t know that there was a secret ending and didn’t manage to get it, don’t worry, here you also find how to get the secret ending. Oh and just to be safe, there will be major spoilers for the Kingdom Hearts games here, so if you’re still not done with the game, be sure to finish, then come back here.

First off, let’s start with the game’s normal ending. After finally being able to beat Xenahort, Sora then is joined by his friends once again, and while Xenahort did manage to open Kingdom Hearts, Sora and his friends together manage to purify it. Also, before cleansing Kingdom Hearts, Terra steps up to talk with Xenahort, and it happens that hiding inside Terra’s heart, was his former master, and Xenahort’s old friend, Eraqus.

They end up talking, then Xenahort hands Sora the X-blade, and finally admits defeat. Reunited with his old friend, he is finally ready to move on. At this moment, Terra, Aqua, and Ventus get one last chance to say goodbye to their master, and it is a really touching moment.

After that, Sora and his friends purify Kingdom Hearts and make their way back to the Keyblade Graveyard, the place where the final battle took place. But even after defeating Xenahort, their victory was bittersweet, as during the battle, Kairi, Sora’s childhood friend, and the girl he loves, ended up losing her life.

So, even though the battle was won, Sora still couldn’t celebrate, as he then chooses to go, and find a way to bring Kairi back, since he was told by Xion that she is ok. Goofy and Donald insist to go with Sora, and king Mickey is against the idea of Sora leaving all by himself since this journey he is going on can be his last one. However, Sora knows that this is something he must do alone, since his journey began when he lost Kairi, and it can only end when he finally is back together with her. 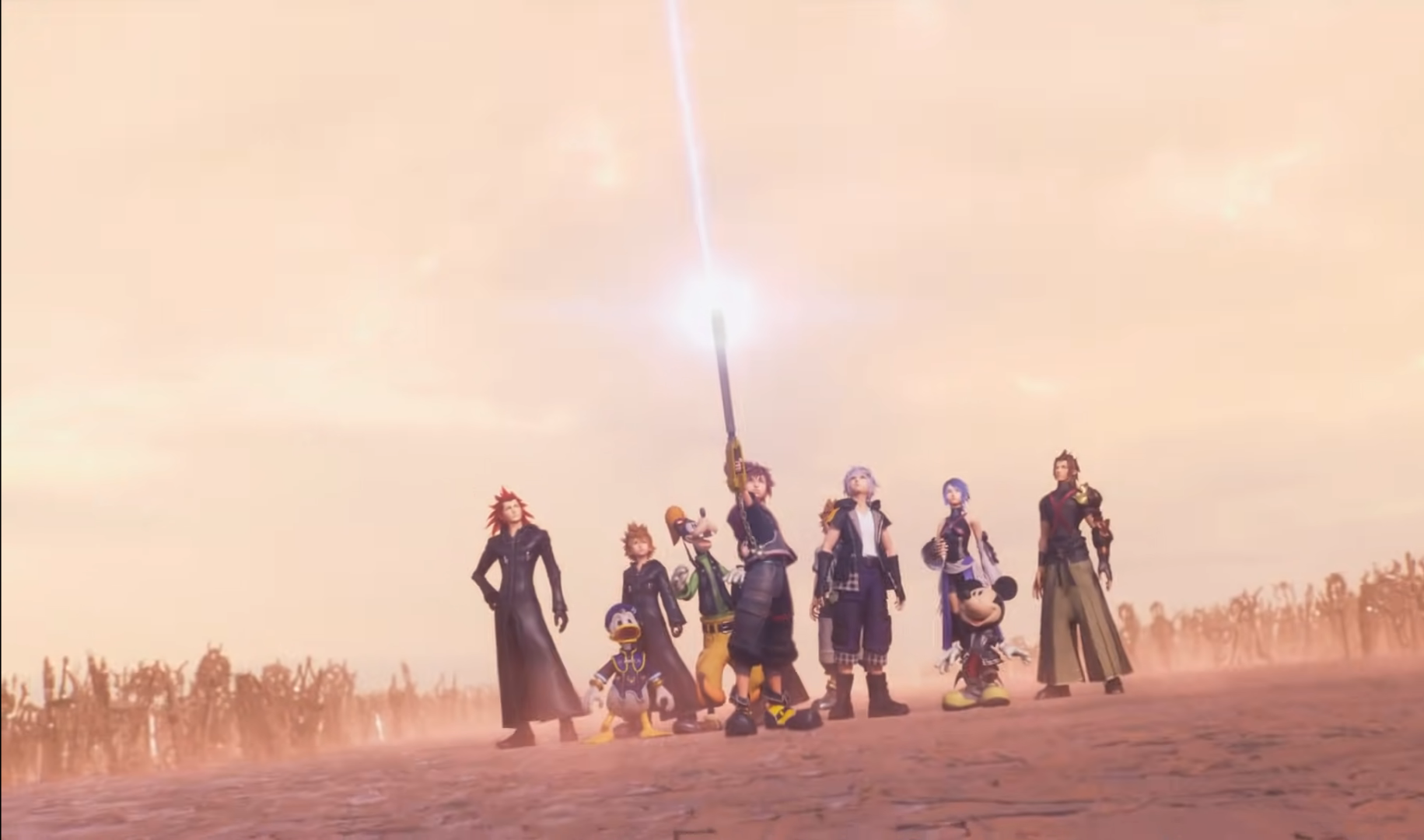 Sora and Kairi being separated is a recurring theme in the series, so this time Sora will stop at nothing to be able to save her. Riku then convinces Mickey to let Sora go, as his heart is already set on doing that, and so Sora leaves, and embarks on his journey to save Kairi.

We don’t actually get to see what actually happens during Sora’s journey, but we do know that he was successful in saving Kairi, as in the final cutscene of the game, we get a montage of all of our favorite characters hanging out, and finally being able to enjoy their lives next to the people they love.

We see Roxas reunited with Lea, Xion, Isa, and also his old friends Hayner, Pence, and Olette, we also see Riku going to pickup Namine. And back on destiny island, we see all the characters hanging out and playing together, but only two people cannot be seen anywhere.

Riku then notices that Sora and Kairi are missing and then see that they are sitting in a Paopu Tree holding hands. We get to see the two of them closer, but then we see that Kairi starts to cry, as Sora’s body disappears. This shocked all fans, as it leaves Sora’s fate completely open.

Did he sacrifice his life in order to bring Kairi back? Sadly, there isn’t any more information about that in the game, so we will have to wait a few more years until we can finally know what happened to Sora.

So while the ending of the game was beautiful, as we got to see all of our favorite characters back together, and that it seems that they can finally live a peaceful life back together, seeing that Sora is not with the gang was heartbreaking, as he finally got the chance to enjoy his life with Kairi. 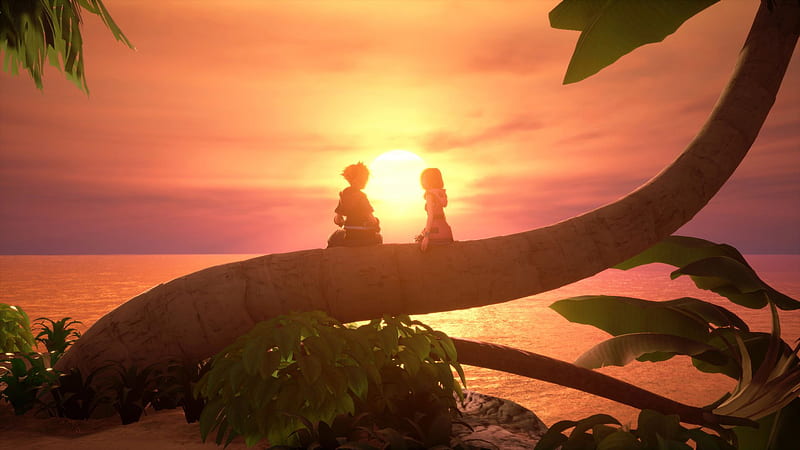 After watching the credits, we then get to see another cutscene, and this one can be really confusing for the newer fans of the series. We are back in the Keyblade Graveyard, and we see a mysterious man wearing a black clock grabbing a Keyblade that was formerly used by Xenahort, and as he grabs it, he seems satisfied to finally be reunited with it.

We also notice that this man is carrying around a black box with him, and before we know it, he is joined by four mysterious masked figures. And for those who played Kingdom Heart X, or watched the movie adaption, these characters should be familiar to you, and they are known as the Foretellers.

The events surrounding these characters take place way before the events of the Kingdom Hearts series, and here is what their story is about. During their time, each of the Foretellers is a keyblade wielder, and all of them had their own guild, and their objective was to capture fragments of lights scattered around the universe.

All of these Foretellers are pupils of a man called Master of Masters, a mysterious man that wears a cloak that we see members of Organization XIII use.

After the Master of Masters creates something called the Book of Prophecies, and it was said that the world would come to an end, the Foretellers wish to stop that from happening, but a conflict ends up happening between the two of them, Ava and Luxu. And from this conflict, the first-ever Keyblade War happened. Since then these Foretellers disappeared, but they have now appeared again, as they were summoned by Luxu.

And one of the biggest reveals is that Luxu is someone that we’ve known for a long time, and we knew him as Xigbar. The other Foretellers are surprised to see how his appearance changed, but he guarantees that he is still the same person underneath.

He then proceeds to tell them that he had a role to play in the story and that he finally completed it. He now has a new mission, and when questioned by the Foretellers about what it is, the scene fades to black.

Another important thing to notice is that during this conversation, we can also see Maleficent and Pete in the distance watching, and it seems that they are interested to know about Luxu’s mission, and what exactly is inside the mysterious black box that he carries. 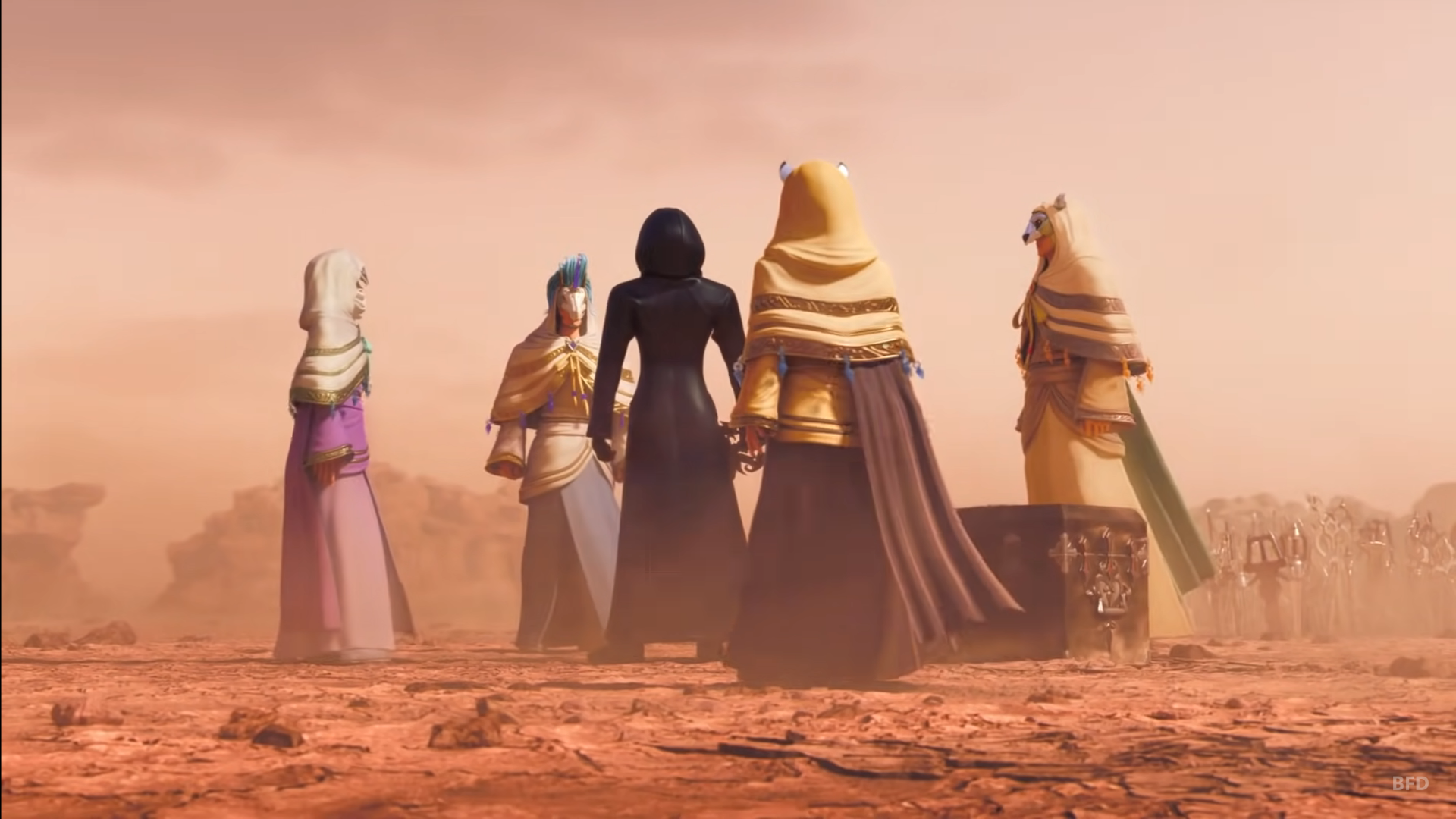 And the last scene we get to see in the epilogue is watching young Eraqus and Xenahort once again playing a board game, and now we see him put together seven dark pieces instead of thirteen, and one single white one.

We can now understand that these seven pieces represent the seven Foretellers, so this hints that they might be the new threat in the future. 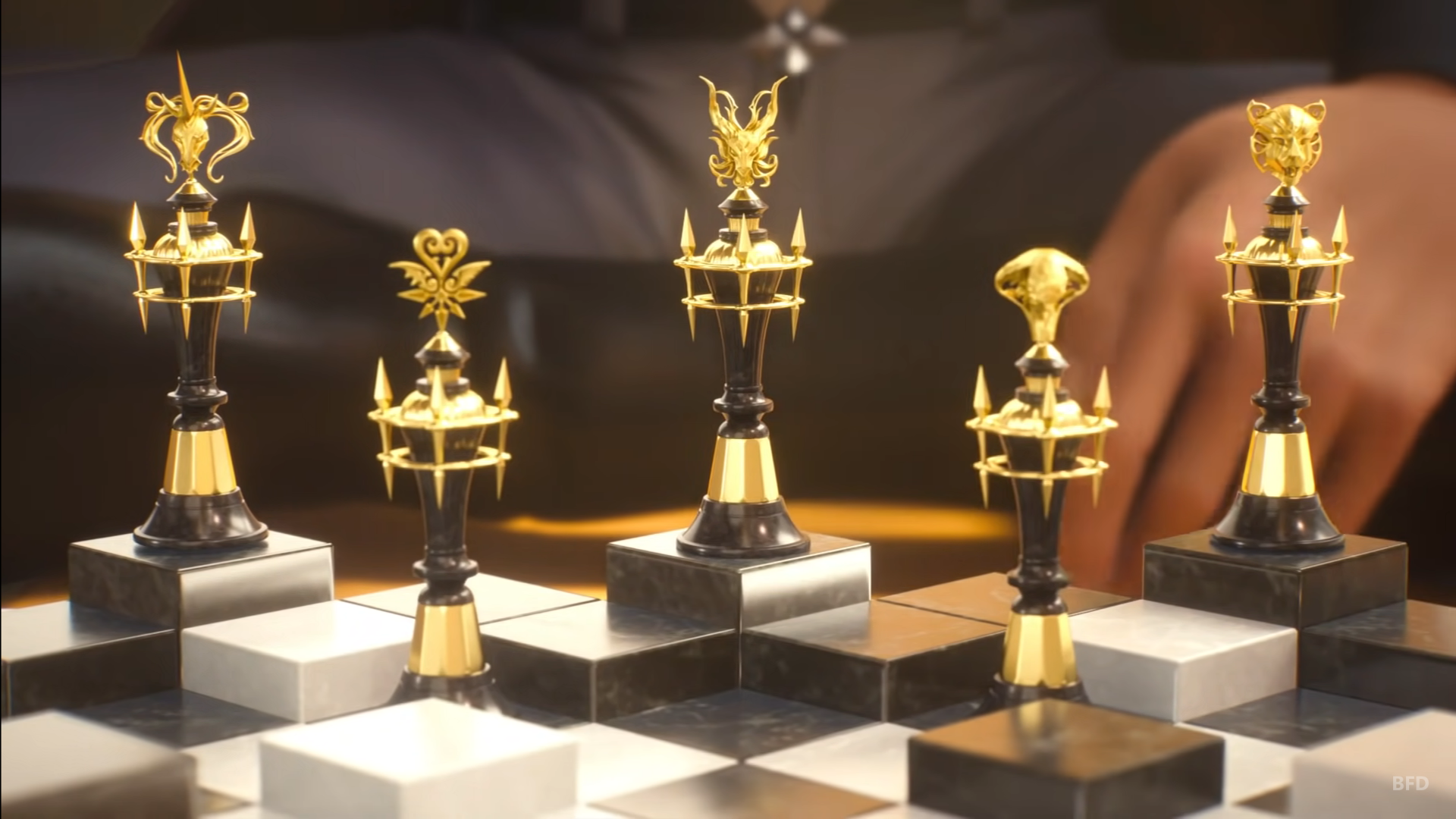 Now, the secret ending of Kingdom Hearts 3 is even more confusing than the previous one, and if you’re not sure how to get it, it is pretty simple. In the game, you will come across Lucky Emblems, and they are hidden in every world.

To be able to unlock the secret ending in the easiest difficulty, you will need to find ninety emblems, but the harder the difficulty, the fewer emblems you’re going to need.  So, in this secret ending,  we get to see both Sora and Riku in a mysterious world, that doesn’t seem to be from any Disney movies, instead, it looks like a more urban and metropolitan city.

Sora seems to be in a pretty familiar place for those who are fans of Square Enix, as it seems that he is in Shibuya Tokyo, and it seems like the one in the game The World Ends With You, whose characters already appeared in another Kingdom Hearts game. 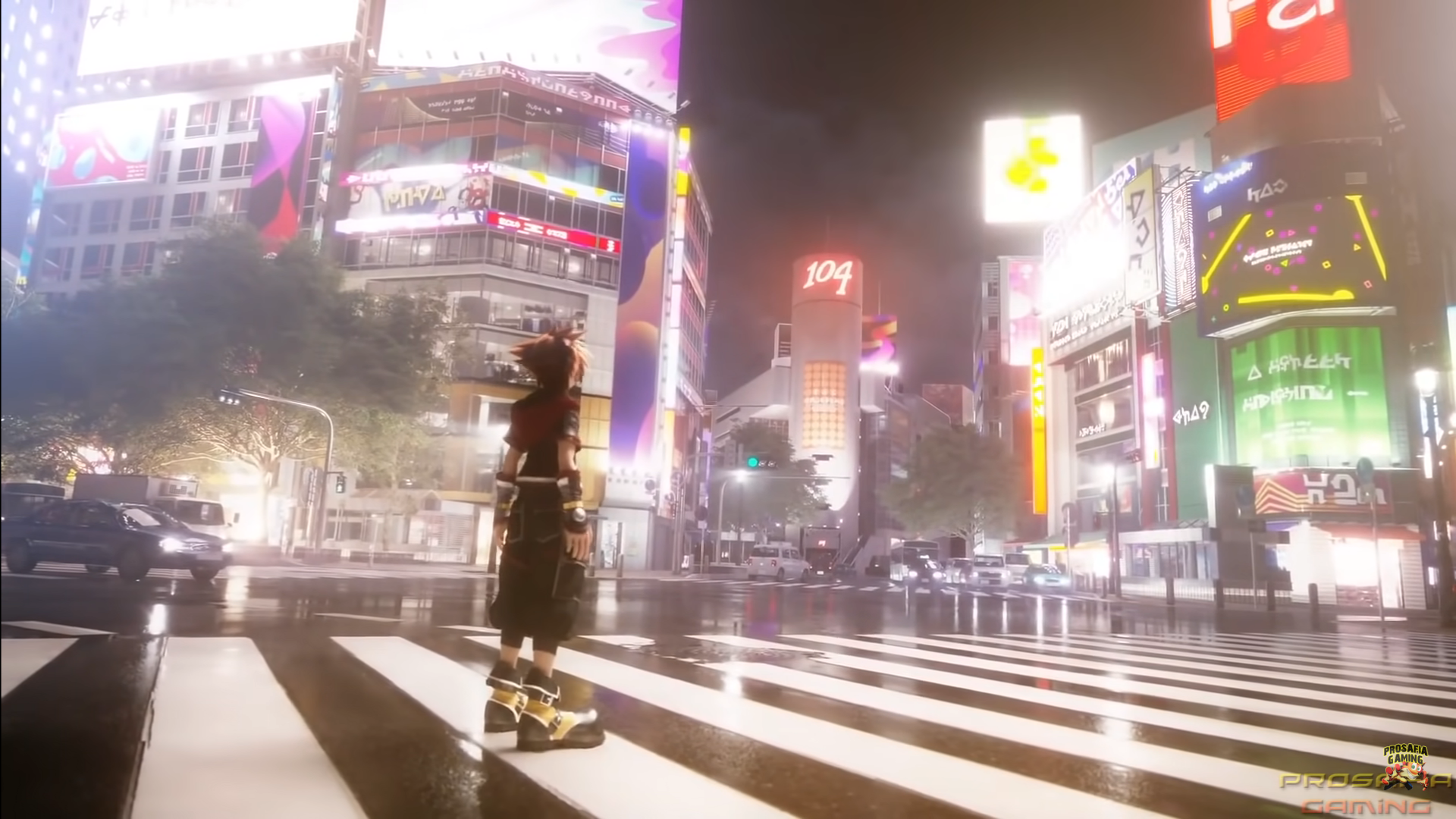 So while we don’t know exactly what this means, we can expect to see more of The World Ends With You in the game. And Riku seems to be in a different place, but also a familiar one for those who played Kingdom Hearts 3.

He seems to be in the world of Verum Rex, which seems to be heavily inspired by the Final Fantasy games, and we get to see Riku walking through that world, and that the protagonist of the game, Yozora, is watching him from a distance.

We also get to see what appears to be the Master of Masters in the same world that Riku is, and we see him putting his hands in the shape of a heart in front of the moon. This hints that Yozora will be important in the future of the series and that we will for sure be revisiting the world from The World Ends With You with Sora.

The Future Of Kingdom Hearts

As always, Kingdom Hearts leaves with an open ending, and with a bunch of confusing information. So here is a quick rundown of what might happen in the next game. We might get to play a parallel story, that changes perspectives between Sora and Riku.

We can also expect Yozora to have a huge part in this next game. The Foretellers will probably be the next big threat that we will have to face, and while the Master of Masters appears gesturing that he will try to bring Kingdom Hearts to Yozora’s world, we cannot know for sure what his true intentions are.