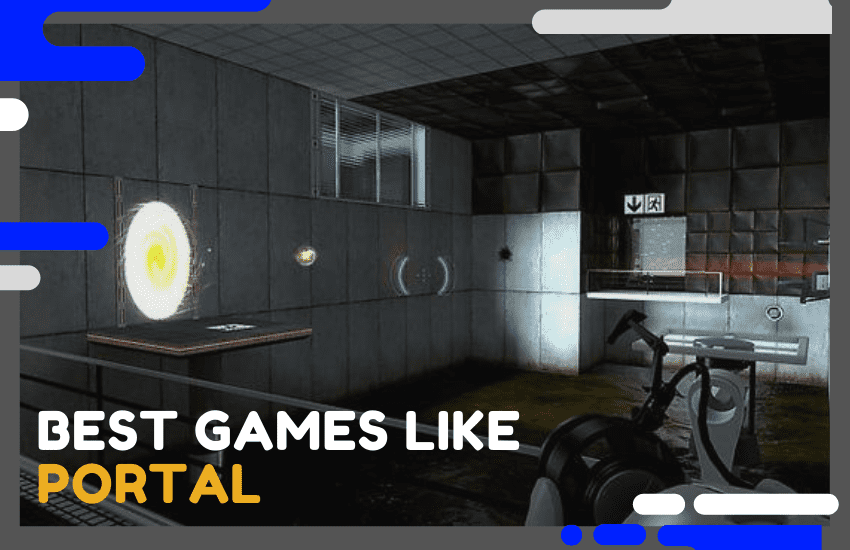 Portal is a single player 3D puzzle game that revolutionized puzzle games. Released by Valve in 2007, the Portal game introduces players to the Aperture Science Laboratories. Their players will take on the role of Chell and a human who has been subjected to tests at the laboratories.

These tests are administered by an unhinged artificial intelligence named GLaDOS. These tests use the portal gun, a gun that opens a small wormhole between two places. With the portal gun, players will solve puzzles that involve moving themselves and other objects through the wormholes. 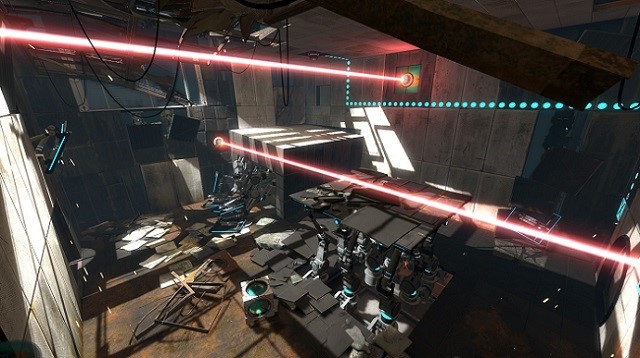 Portal 2 brings players back to Aperture Science Laboratories, but this time with multiplayer mode in comparison to the original Portal. Single player game mode brings back GLaDOS, the unhinged artificial intelligence that runs the Laboratories.

Players will solve new complex puzzles and explore new areas of Aperture Science Laboratories. In cooperative mode, players must rethink how they approached Portal puzzles on their own and work together to solve them. Portal 2 was published in 2011 by Valve and it’s available on PlayStation, Xbox, Microsoft Windows, Classic Mac OS, and Linux. 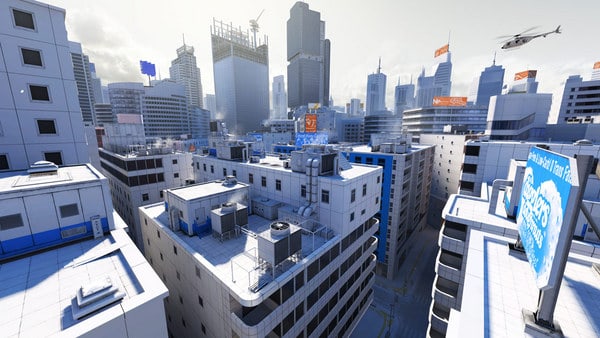 Mirror’s Edge series are a story driven action packed game that takes place in a world where information is heavily monitored, and runners are tasked with transporting sensitive data away from prying eyes.

Step into the shoes of Faith, a runner who finds herself being hunted after her sister was framed for a crime. Mirror’s Edge allows players to soar and parkour over the city while fighting enemies and trying to stay alive. Mirrors Edge was published by Electronics arts in 2009. 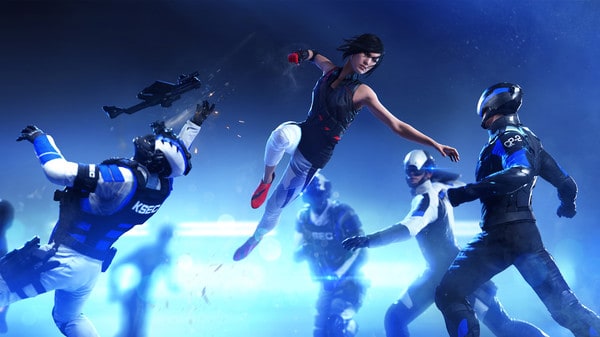 Mirror’s Edge Catalyst is the sequel to the praised game Mirror’s Edge. This is a great game that has players step back into the shoes of Faith, a runner who transports sensitive information away from prying eyes.

Now Faith is fighting for freedom in the City of Glass, a high tech utopia on the outside with a terrible secret on the inside. Follow Faith as she explores every corner of the City of Glass. Mirror’s Edge Catalyst was published by Electronic Arts on June 4th, 2020. 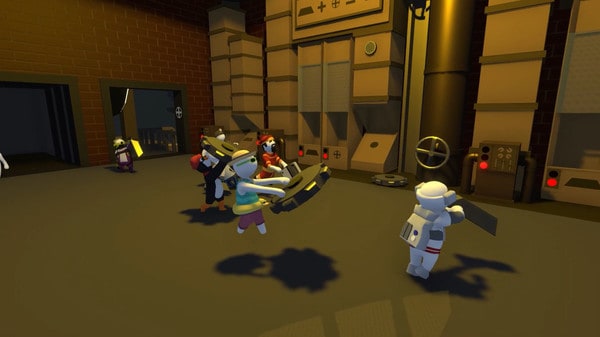 Human Fall Flat is set in a world of floating dreamscapes. A light hearted and fun puzzle game, Human Fall Flat allows players to have a fun time either alone or with friends.

Players will try to solve mind bending puzzles with their wobbly humanoid characters. However, things often go hilariously wrong, as the characters accidentally fall off platforms, ropes, or even pushed by other players. 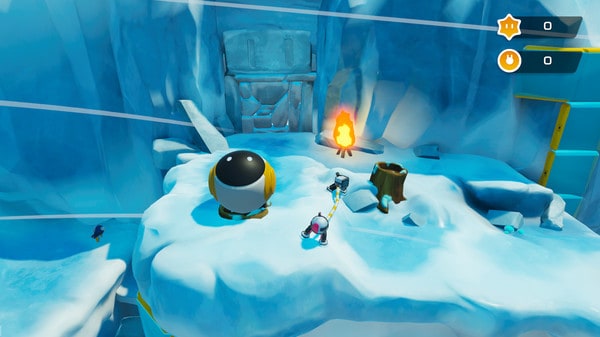 Biped is a cooperative adventure game where two players take control of two bipedal robots named Aku and Sila. Together players will control the robot’s legs using either joy cons or the left and right mouse buttons; this allows them to move and climb while working together.

It also allows players to operate things like machinery and other advanced actions. Biped is a cute simple and great game that allows players to explore the world as two cute little robots. Biped was published by Next Studios on March 26th, 2020. 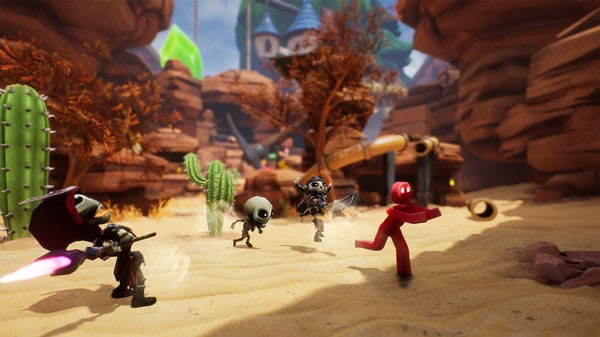 Supraland combines Zelda, Metroid, and the Portal game into one fun Metroidvania puzzle game. Players will explore a large interconnected world with a minimal storyline. With only one overarching goal, Supraland lets players explore and play with minimal direction.

This allows for replayability and some fun surprises as players figure out the game. The game focuses mainly on exploration and puzzles, with a little fighting in between. Supraland was published by Supra Studios in 2019.

Additionally, there are two new levels in the series, The Stormy Ascent and Future Tense Level. The Stormy Ascent is a previously unfinished and unreleased level that will challenge players with fast retracting steps, vial throwing lab assistants, flying birds, moving platforms, and iron spikes.

A Hat in Time 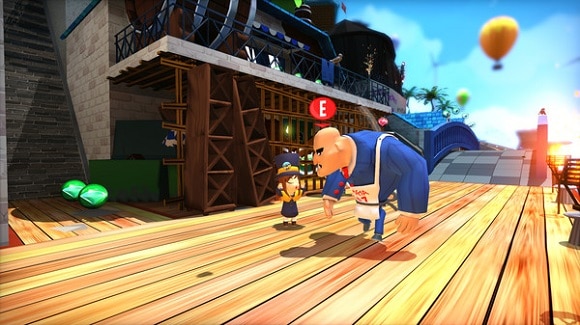 A Hat Time is a 3D platform game that features adorable graphics. Players step into the shoes of a little girl with a spaceship and a big top hate.

When she loses her fuel across a nearby planet, players are tasked with helping hat girl find her fuel. They’ll meet different characters and explore the planet, all while switching hats for new powers.

A Hate Time is an open world game and contains five different worlds to explore. A Hate Time was published by Gears for Breakfast in 2017 and it’s available on Nintendo Switch, PlayStation, Xbox One, Microsoft Windows, Macintosh operating systems, and Classic Mac OS. 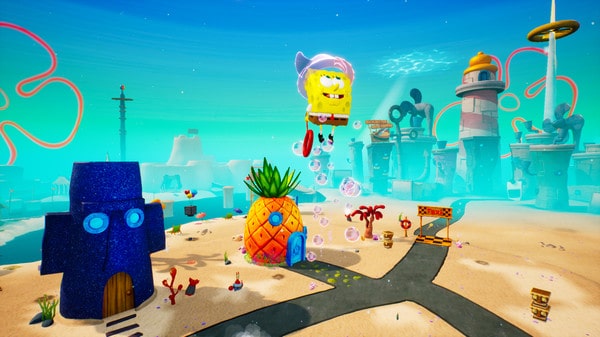 Bikini Bottom Rehydrated brings the loved characters SpongeBob, Patrick, and Sandy from the TV world to the video game world. Play as any three of these characters or team up with friends and play together.

The goal of the game is to thwart the long time nemesis Plankton as he tries to take over Bikini Bottom with an army of robots. The game features high end modern visuals, a new multiplayer mode, and content that was originally cut from the game. Bikini Bottom Rehydrated was published by THQ Nordics on June 23rd, 2020. 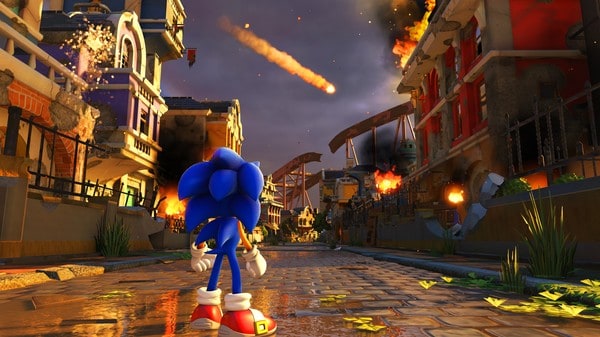 Sonic Forces tasks players with defeating Dr. Eggman, who has taken over the world with the help of a mysterious and dangerous new enemy named Infinite.

Players must help Sonic build an army to reclaim their world from destruction. Players will play as modern sonic, defeating enemies in a blink of an eye or play as classic sonic to catapult past platforms or choose to play as your own main character equipped with fun and powerful gadgets. Sonic Forces was published by SEGA in 2017 and it’s available on Nintendo Switch, PlayStation 4, Xbox One, and Microsoft Windows. 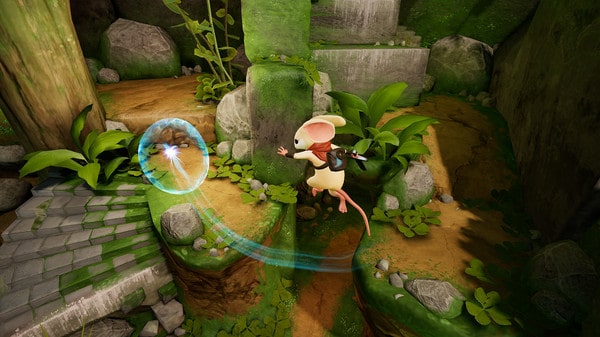 Players will step into the shoes of Quill, a mouse who dreams of greatness beyond her settlement. Quill finds a mysterious Glass Relic that awakens ancient magic.

Now her uncle in peril, and she needs the players’ help to defeat the darkest of enemies and solve the hardest of puzzles within the forgotten realms. Moss was published by Polyarc In 2018. 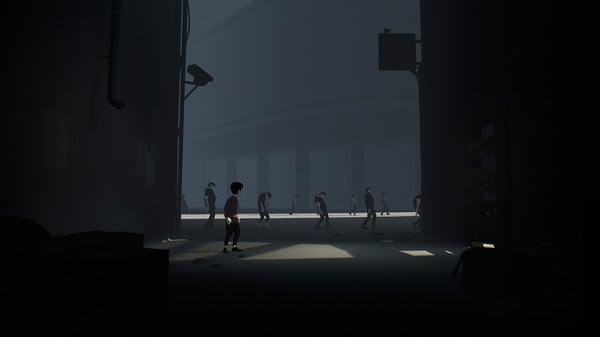 INSIDE is a narrative driven puzzle platformer that combines intense action with challenging puzzles. Play as a boy who finds himself drawn to a dark project, while hunted and alone.

INSIDE is critically acclaimed for its dark and moody art style, unsettling atmosphere, and ambient soundtrack. INSIDE was published by Playdead in 2016. 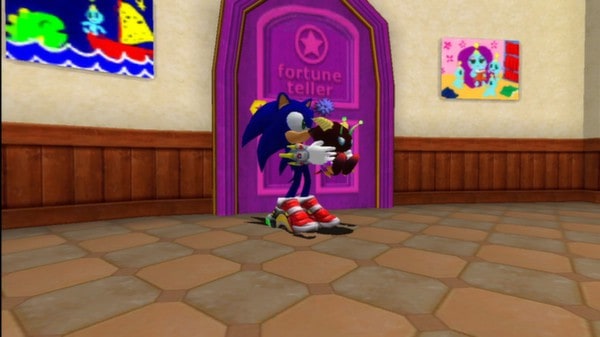 Sonic Adventure 2 lets players choose their side, are you a hero or a villain. There’s a hunt on for the Chaos Emerald and everyone wants it.

The gamer can choose their side, be a hero and play as Sonic, Tails, or Knuckles or choose to be a villain and cause chaos as Dr. Eggman, Rogue or Shadow.

Players can also challenge friends in two player mode to kart racing and other games. Lastly, players can even raise their own pet Chao. Filled with 150 different missions across 30 different stages, players will never get bored. Sonic Adventure 2 was published by SEGA in 2012. 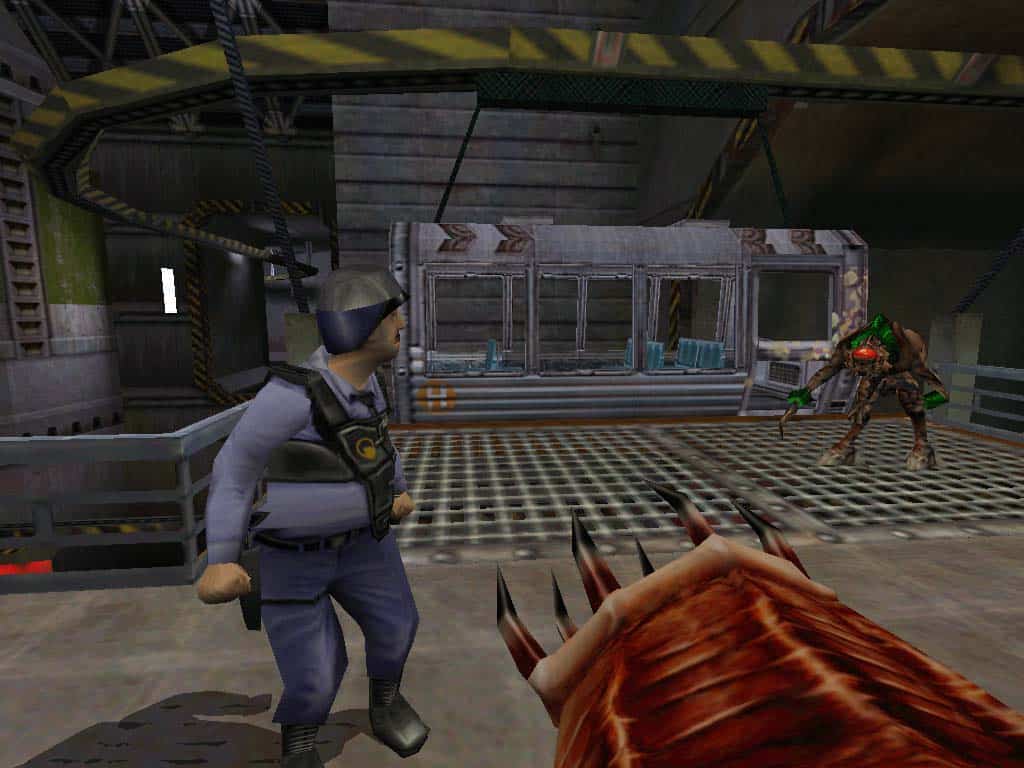 Half-Life Opposing Force brings players back to the Black Mesa Research Facility as a research specialist that is tasked with eliminating Gordon Freeman. 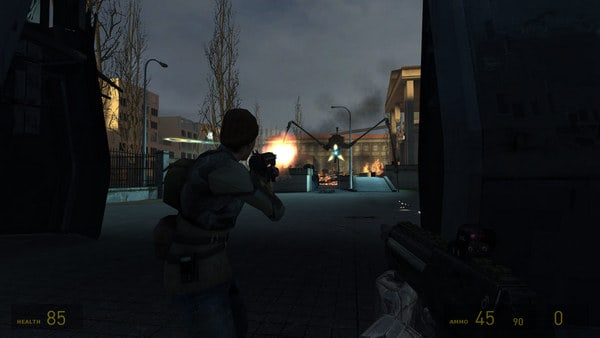 Half-Life 2 brings players back into the world of Half-Life, an alien infested planet. Players step into the shoes of Gordon Freeman, who must now face the wrong he unleashed at Black Mesa research facility and save the world.

Half-Life 2 is a world where the players’ actions affect everyone and everything around them. Half-Life 2 was published by Valve in 2004. 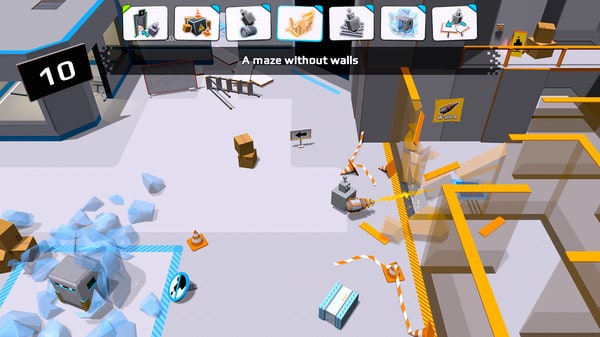 Area 86 is an escape room fun puzzle game based on physics. Players control a little robot who is stuck on a secret space station with Artificial Intelligence that is corrupted.

Players will solve puzzles and escape rooms by pushing, activating, destroying, and picking items up. If players save their fellow robot brethren, the play will become more powerful.

Each level has multiple ways to complete it, allowing players to use their imagination and puzzle solving skills. Area 86 was published by SimDevs on April 15th, 2020. 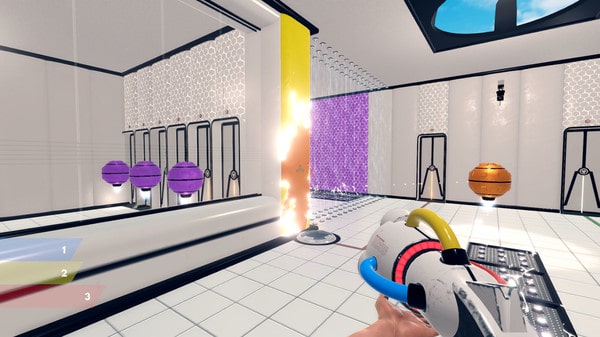 The goal of the game is simple, escape the chambers through the doors while avoiding the worker drones. Paint the walls and worker drones to beat the levels and reach the exit door. ChromaGun was published by Pixel Maniacs in 2016. 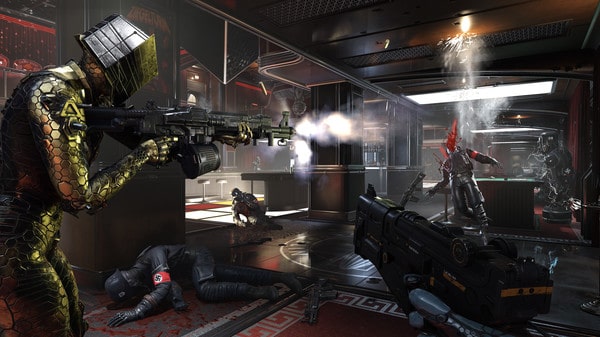 Wolfenstein Youngblood brings players back into the Wolfenstein universe 19 years after the events of Wolfenstein 2. BJ Blazkowicz has disappeared into nazi run Paris after a mission, and now his twin daughters Jess and Soph are forced into action.

Play with a friend or play alone, players will be taken right into the heart of Nazi occupied Paris with the goal of dismantling the Nazi regime. Wolfenstein Youngblood was published in 2019 by Bethesda Softworks. 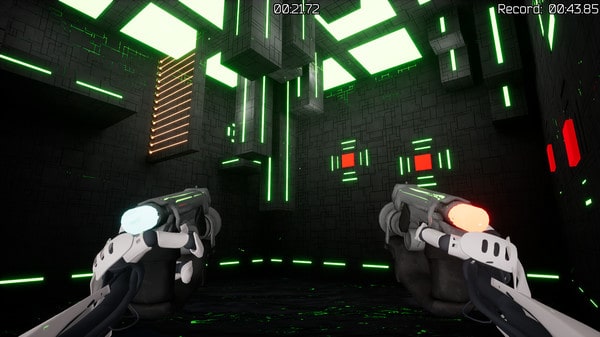 Impulsion is a first person puzzle platformer that is designed to be fast paced and play with your reflexes and nerves. The game has 25 levels that are increasingly more difficult.

Players will manipulate physics and shooter force fields to slow or speed themselves or the environment up. Impulsion features, fast paced gameplay, a funny science fiction story mode, competitive mode with Steam leaderboards, and lastly, a speed run mode for players that want a challenge. Impulsion was published by Dear Villagers in 2018. 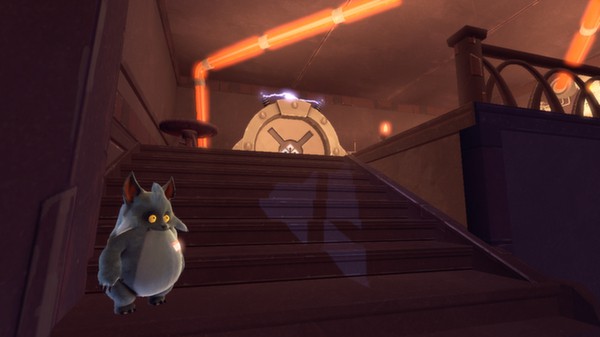 Quantum Conundrum places players into the shoes of a young boy who is dropped off at his uncle’s house only to find him missing. Now the gamer must find and save the young boy’s uncle using his newest invention, the Interdimensional Shift Drift or IDS.

The IDS allows players to shift between dimensions to solve puzzles and navigate through the weird mansion. Quantum Conundrum was published by Square Enix in 2012.

What kind of game is Portal?

The Portal series is a Sci0Fi 3D puzzle platform game. The game focuses heavily on completing complex puzzles in order to complete each level, and it is set in a sci-fi world of Half-Life.

Why is Portal so popular?

Portal series is popular because its a fun, challenging game, set in a world that players are already familiar with. Portal balances an intriguing story, humor, and challenging gameplay to create a game that has infinite replayability.

The original Portal is not multiplayer. However, Portal 2 does have a cooperating mode that allows for two players to complete puzzles together. Portal 2 also has a separate storyline for the cooperative mode, allowing for dynamic gameplay and replayability.